iOS workout app designed to help you achieve your best self

Create your own workout or allow us to create one for you. Randomized workouts include exercises to create a full body workout. Or, revisit your favorite saved workouts! 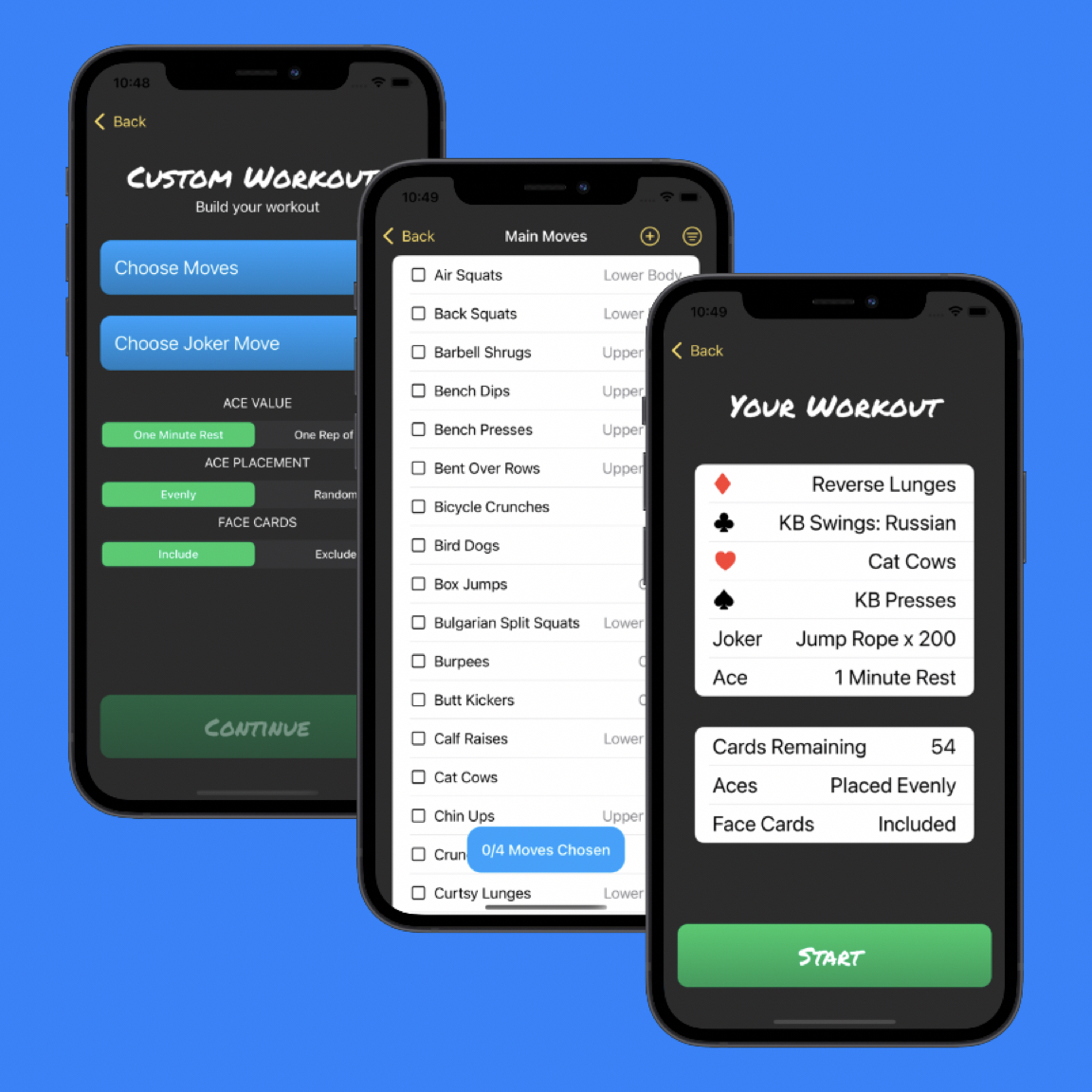 Choose the exercises you would like to include. Pick from cardio, core, full body, upper body and lower body exercises. Mix and match to create your perfect workout!

See your results at the end of every workout. Includes now many repititions were completed of each exercise and the time to complete the workout!

Charlie, owner of TrulyTen, and his son Turner created Fit Deck as a team. Charlie’s love of programming began in 2015 when Turner asked him for help with a school project working with RFID cards and tracking student attendance. Charlie loves to spend time with his 2 sons, and coding together was a perfect fit. Over the next few years, Charlie dabbled here and there in coding, but became serious about it in 2019. Charlie was scheduled for a major knee surgery that would keep him immobile for 2 months and was looking for something to do during the down time. Turner suggested becoming more involved with coding, and the father / son team was born. The surgery was in December of 2019, and right as Charlie was close to being able to return to his previous activities, Covid-19 shut down the country. Turner moved home from college. Charlie continued to work on his programming skills with Turner’s help. He has since published 5 apps to the iOS App Store, including WOD Math. Earlier in 2021, Charlie started TrulyTen LLC (an anagram of his sons’ names) to formalize his programming business.

Turner has been in love with computers since the age of 3. At 11 years old, he began to teach himself to code. iOS became his true passion, and at 15 he pushed his first app to the iOS App Store, JobWellDone, a tip calculator. Throughout high school, he continued to grow as an indie developer, and by the time he graduated, he had 7 apps published through the App Store. Turner’s dream is to one day work for Apple, and this dream began to come to fruition his freshman year at Kennesaw State University when he saw a tweet from Apple looking for an intern for the App Store team. Turner applied, interviewed, and was hired as an intern for the summer of 2020. After one of his best summers ever, he was invited back to intern for the same team in 2021. Turner completed this internship early August of 2021 and is looking forward to returning to Apple next summer and full time upon graduation.

Charlie’s other passion is group fitness. He has numerous fitness certifications and loves to help others reach their full potential in group workout settings. Charlie can be found coaching athletes at Dawson CrossFit every week. The idea for Fit Deck was born in June of 2021 after coaching a common CrossFit WOD, ‘Deck of Cards’. Charlie began working on the app, and in August upon his internship completion, Turner joined his dad as lead developer  on Fit Deck. While Turner and Charlie have helped each other many times over the years, this is the first of hopefully many iOS apps that they will build together.